Hans Magnus Enzensberger (b. 1929) is a leading contemporary German intellectual who has made his mark throughout Europe and well beyond. Enzensberger is an acclaimed poet, novelist and essayist, as well as a theorist, dramatist, and media artist. And as an essayist writing for Germany’s leading magazines and newspapers, Enzensberger has been an incisive critical voice in moments of political and cultural crisis for many years. Presented here are the 21 television interviews that Kluge has held with Enzensberger since the early 1990s. 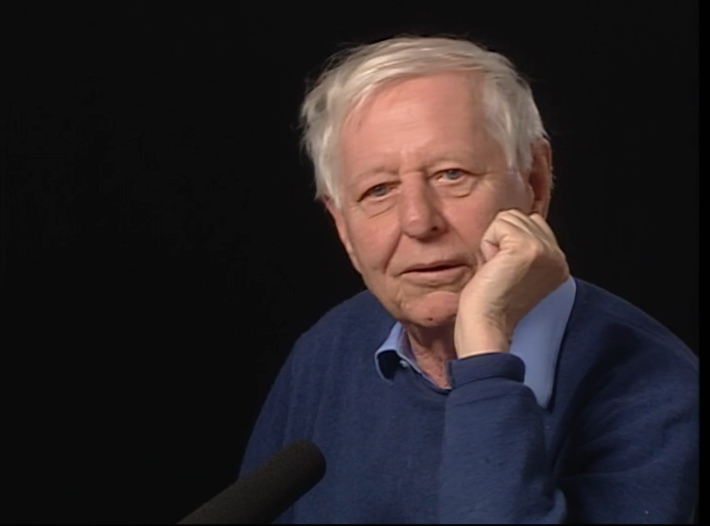 On November 11, 2019 Hans Magnus Enzensberger turned 90 years old. With that, he enters the fourth stage of life: “ancient age” (to use Carl Schmitt’s term). He was fifteen in 1945, twenty-nine in 1968. It was the Parisians who invented the public intellectual, a figure seldom encountered in decentralized Germany. Heinrich Böll’s home was searched in 1972 in the wake of the Red Army Faction investigation. It’s difficult to imagine a German politician taking the stand of a de Gaulle, who supposedly said, in response to calls for Sartre’s detention: “One does not arrest Voltaire.” Under such circumstances, the radical and poetical lightness that Enzensberger has steadfastly maintained throughout his life is particularly astounding. Diderot, who was always a touchstone, may have assisted him in this regard. And, incidentally, his oeuvre is far more extensive (and tends more toward the comic) than what has appeared under the name “Hans M. Enzensberger.” Whether Andreas Thalmayr, Linda Quilt, Elisabeth Ambras, Giorgio Pellizzi, Benedikt Pfaff, Trevisa Buddensiek, or Serenus M. Brezengang are all pseudonyms he has employed for his writing remains somewhat uncertain.