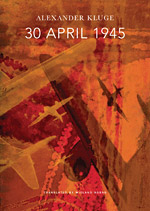 April 30, 1945, marked an end of sorts in the Third Reich. It was on this day that while the Red Army occupied Berlin, Hitler committed suicide in his underground bunker, and, in San Francisco, the United Nations was being founded. Alexander Kluge’s latest book covers this single historic day and unravels its passing hours across the different theaters of the Second World War. Translated by Wieland Hoban.

He Wished He Could Come Home

Still the old arrogance. Wrapped up in his military coat, physically intact, even chubby-cheeked. He also had a car with driver at his disposal. There was no visible sign of the guilt he carried inside him.

He moved carefully and approached the property, his own house, from the edge of the forest. When he could see all of it he paused. He waited for a long time. Now the children came out, they played in the yard and the garden. He watched them for a long time. He also saw his wife, who was setting out for town. He would have liked to take a shower, change his clothes, embrace his wife and children. He could not show himself. His presence would contaminate the family, and he could not rule out the possibility that the property was a trap and there would already be men waiting to catch him. Perhaps he and they were watching the same house. When he returned to the vehicle he had a strong feeling that he would not see this place again. Even if he made his escape alive, using the route prepared by his comrades, there would be an ocean separating him indefinitely from what had once again attracted him so violently.

In April 1945, two high-ranking SS and Police Leaders, entangled in murderous actions and united by friendship, were in the service of the German Embassy in Tokyo. The friends certainly had no intention of being taken prisoner by the Allies (for the dissolution of the German Embassy was inevitable within a certain time frame). They chartered a Japanese whaling ship that brought them to the Kerguelen Islands, to an ice-covered, almost empty French island in the outermost South Pacific.

By 30 April – they had been keeping a calendar like Robinson – they had already lived in isolation for a few weeks in their tent. The whaler would have reached the Japanese mother island again by now. There was so little chance of ever leaving this island, a terrain of gravel and ice, and hence of being in the company of other people (even if these would arrest and punish them for their deeds), that they had decided to shoot each other. And so each shot the other. But there was a fraction of a second between the shots, which meant that one of them was fatally struck, but the other was not. The one who had been spared still held out heavily-wounded for a few more days, under the protection of the tent, as a ‘survival’. Then he felt sufficiently recovered and shot himself (he had feared nothing more than an inaccurate shot). No one can survive without the company of others.

In the Seven-Hill City of San Francisco

In no way, states the Neue Zürcher Zeitung on 29 April 1945, can the seven-hill city of San Francisco be compared to the seven-hill city of Rome, where an empire was born, or with Versailles, where the League of Nations was founded. The delegations from fifty-one nations initially forming the UN convene in two large halls that constitute the conference centre. In fact, however, such assemblies rarely take place. Diplomatic relations are maintained between the four major powers and the heads of the other states’ delegations.

An Indian delegation led by Pandit Nehru has taken up residence at a hotel. This unaccredited group is being closely and conspicuously observed by British secret agents. The intention is to disrupt their communication with the other three major power and the delegations of other influential states. The British agents are in turn being followed by US agents, which prevents them from using illegal methods on American soil to drive away the ‘Indian guests’. Officials from the bureaus of the former League of Nations (whose statute, however, is officially in force until the final establishment of the United Nations), as well as previous secretaries-general, are present. Together the with idealist Richard Nikolaus Coudenhove-Kalergi, they form a personnel that deviates from the modern, pragmatic, war-marked type of politician. The congress is presided over by businessmen who act in a sober fashion and focus on specific goals, like Paul-Henri Spaak, Georges Bidault and Eelco van Kleffens. They are not innovators.

The majority of stenographers from the Führer’s headquarters were on standby in Berchtesgaden, where they had been evacuated from Berlin. The valuable typists were residing in the garden house on a property adjoining the buildings of the Wehrmacht Supreme Command. They were busy all Monday stoking a fire in a wooded area by burning the records  they had made regularly since Winniza 1942. Secret documents could not fall into the hands of the Allies. This course of action was responsible, but could also be viewed as defeatist. After all, originals that all contained words uttered by the Führer in meetings were being destroyed as if the outcome of the war was absolutely certain. Over 3,000 hours of copying! That was painful for these masters of shorthand.

The retired teacher and Reichstag stenographer Hängst, one of the fastest stenographers in the Reich, walked around the fire, making sure there were no half-burnt remains in the zone where the flames gave way to the wet grass, which had been snowed on during the night. When great Vikings died they were laid out on ships, which were then set on fire and sent out to sea in the direction of the sunset.

In a Small Town

The telephone connections do not extend far. There are no trains. Thus the town and its population are on their own. But migrants arrive with handcarts and bicycles, and refugees come from the area east of the Elbe.

Before, the town was part of a network: the Reich. The net has been torn apart, so now the town breaks up into pieces. It was not the bombs that caused this division twenty-two days ago. On the contrary, the destruction re-mobilised the old organisational structures – the city council, the National Socialist People’s Welfare, the activity of teachers as organisational directors, and the notion that a quick reconstruction was possible. Now the people in the lower town refuse to be ordered around by the authorities. The refugees are not registered, so they obey no one either. The employees of the post office and the district library on the cathedral square appeared for work. But they no longer act together with anyone. The regression to a ‘new reality’ releases energies from earlier realities that were simply covered up.

Like foxes we roam through town’s basements, the deserted public buildings. One can find plenty of usable material there; but first one has to find out what it can be used for. The third building of the primary school, for example, a solid brick building, was recently a reserve military hospital. One can get blankets and bedclothes there; piles of books and games, collected from donations by private households towards the end of the war for the entertainment of the wounded in their periods of convalescence; test tubes and many types of medical vessels. One can fill ‘German sparkling wine’, which can be found by the crateful in one of the lower town’s cellars (from an air force supply that had been transferred there), into such test tubes and vessels and have a drinking bout with six or seven school pupils.

My father showed a master bricklayer the rubble-filled ruin of our house. The facade, foundation wall and fire wall are still standing up to the first floor. One could rebuild it up to the first floor for 80,000 Reichsmark, the master bricklayer says. Maybe, he says, the fire even made the stonework harder. But the expert can’t say more than that. Then a slope will have to be built on the first floor and covered with roofing paper so that the rainwater can drain off. Where will we get the roofing paper? There might still be some at the Junkers factory. The days are cold and damp. Finding fuel is one of the aims of the residents’ trips of conquest. Once again in the basements of deserted public buildings: piles of black coal. They can transport it in handcarts and crates.

The churches are standing open and bare. There is strangely little to be had there. Not that the vicars and sextons took anything for themselves; rather, the houses of prayer were emptied of their treasures in the Reformation (and the Counter-Reformation emulated it). One larger looting expedition reached the Rübeland caves, where some people had transferred their effects (furniture, pictures, silver, stamp collections). The caves are deep in the mountain and considered safe from bombs. One possible danger to the valuables comes from the dampness of these dripstone caves, where a lot of brine gathers at the bottom. The explorers from the small town inspect the unguarded stores of possessions. But here in the mountains, they see little possibility of removing them at the moment. One can’t cover the distance from the town to the mountains on foot and with a hand cart (or even a simple horse-drawn cart) several times a day.

An officer of the occupying power from Minnesota, a teacher by profession, experienced how energetically the residents entered the undestroyed basements of the Büttner department store (there are five, going back to the Middle Ages) at the Fischmarkt only two weeks ago. The throng of people, including children, could not be stopped by guards or military means. In the case of those who poured out of the basements carrying food on the side leading towards Lindenweg, the US guards knocked the loot (boxes of food and other goods) out of their hands. But while the soldiers were doing so, other people carrying spoils went past them, so most of it reached the town. And there was no point in leaving the unroasted coffee beans, tins of sardines and biscuits, and preserved meat lying on the floor around the basement exits. The officer, who was acting as commander and supervisor, was ultimately only concerned with preventing the population from being shot at, which resulted in the agitated crows overrunning the few soldiers. The US Infantry was not trained in the administration of a town. The best way of forcing the people to obey was to leave them alone.