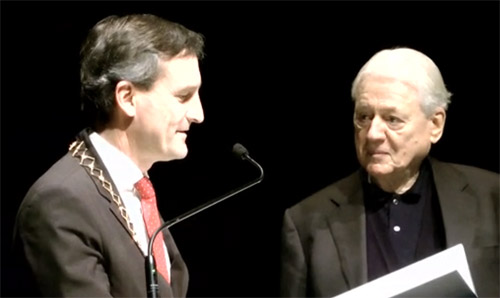 Professor Alexander Kluge – film maker, author, and doctor of law – has been awarded the 2014 Heinrich Heine Prize of the City of Düsseldorf. Established in 1972, the Heine Prize is one of Germany’s most important prizes conferred on individuals for distinguished achievement in literature, culture, and society at large. The award includes 50,000 Euros in prize money, making it one of the most generous, in those terms, in the German-speaking countries. Düsseldorf’s Mayor Thomas Geisel presented the award on December 13 – the 217th anniversary of Heinrich Heine’s birth – in a ceremony held at the Düsseldorfer Schauspielhaus theater. The painter and sculptor Anselm Kiefer gave the laudation.

The Heine Prize jury reached its decision in October, explaining the vote as follows: “The 2014 Heinrich Heine Prize of the state capital Düsseldorf goes to Alexander Kluge. Without self-censorship, he assembles subjective experiences and authentic materials into works of art that astound us, works of art that both reflect and challenge modern existence. As an important representative exponent of Critical Theory, he carries forward the poetic, journalistic, and political work of Heinrich Heine.”

A jury appointed by the city council of the state capital Düsseldorf confers the Heine Prize “on individuals who, through their intellectual work on behalf of the fundamental human rights that Heinrich Heine advocated, promote social and political progress, foster understanding among peoples, or expand recognition of the common bonds among all human beings.”